Marking the 10-Year Anniversary of the First XACML Interoperability Demo

The “wayback” machine, fortunately, captured some posts about the event. For example, we put out a call to action in February that year to line up vendor participation: 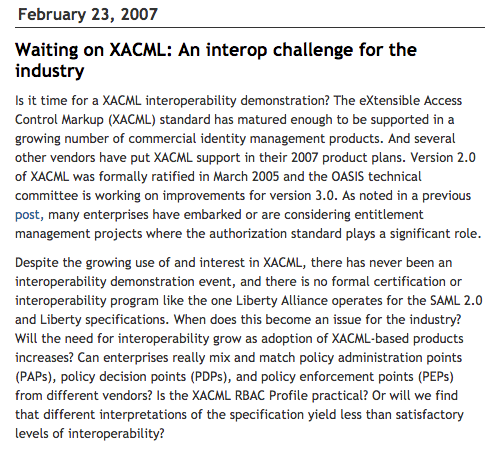 Leading up to the event, I posted this 2 weeks before Catalyst:

OASIS has an excellent recap here: https://www.oasis-open.org/news/pr/eight-companies-demonstrate-interoperability-of-xacml-oasis-standard-at-catalyst-conference. Anil Saldanha (@anilsaldhana) also wrote up a short summary of the event and was wise enough to capture  Hal Lockhart interviewing the participants. You can find the blog post and a link to the podcast here: http://anil-identity.blogspot.com/2007/06/oasis-xacml-interoperability-event-at.html

XACML remains an important interoperability standard for Axiomatics, as we use it in a number of integrations with third party products. In version 3.0 of XACML, new profiles have been added recently that further enhance interoperability between different implementations of XACML. I am referring to the profiles for REST and JSON support, which are additive to the core specification.

To learn more about XACML, please visit our Resources section.